Khair Bakhsh Marri was optimistic about his goals. 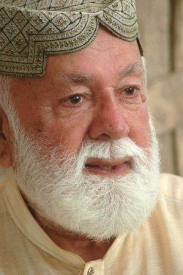 NAWAB Khair Bakhsh Marri, who had to be in coma before death finally overpowered him some days ago, had been living for the better part of his life with a broken heart. Nobody could prevent him from struggling for the right of his people but he was never allowed to serve them the way he wanted to.

Greater than his personal tragedy was the inability of the Pakistani state to benefit from his capacity for opening a new chapter in the Baloch people’s history.

He was barely three years old when his father, Nawab Mehrullah Khan Marri, died and his estate was taken over by the Court of Wards. The one good thing that resulted from this arrangement was that he was sent to Lahore’s Aitchison College. Although he acquired some princely habits, such as socialising with men and women of intellect and beauty, he found better companions among the heroes of revolutions he read about.

By the time he was dragged into politics by the Ayub regime’s plans for prospecting for gas and oil in the Marri area, he’d been recognised as a scholar who invoked socialist axioms to resolve the contradictions he encountered in his personal life or politics.

Though always sceptical of the scope for parliamentary democracy in Pakistan he gave it a try. When he was elected a member of the National Assembly in 1970, along with Ghaus Bakhsh Bizenjo and Dr Abdul Hayee, while Ataullah Mengal and Gul Khan Naseer dominated the provincial assembly, Pakistan had a unique opportunity to win the Baloch people’s support for a voluntary federation of equal units.

The conspiracy that resulted in the dismissal of the Ataullah Mengal ministry, Abdus Samad Achackzai’s break with the National Awami Party, the infamous Hyderabad trial and the split within the Baloch group, caused a setback from which Pakistan has still not recovered. The entire community of democrats was disillusioned but no one more so than Khair Bakhsh Marri. On the one hand he lost faith in his nationalist friends; on the other he convinced himself that the ruling elite was only interested in expropriating Balochistan’s natural wealth.

Eventually, he broke away from all comrades concerned with the plight of the Baloch in Balochistan alone or were ready to accept offices without power; he set his eyes on the goal of freedom for all Baloch. He was optimistic about the success of this cause. Malik Siraj Akbar has reported Marri telling him in 2008: “We are unlikely to compromise on anything less than freedom of the Baloch nation. We are optimistic of achieving our goals, though gradually.”

Those who criticise Khair Bakhsh for giving up on Pakistan don’t realise that the maximal position he took was not his first choice. He was driven to the extreme by the rulers’ refusal to concede the Baloch people’s right to be masters in their home and to own and develop their natural resources. And killing his son was no way of winning over an angry nationalist. Now Khair Bakhsh’s successors will find it hard to ignore his legacy.

Khair Bakhsh’s rise as the most uncompromising Baloch leader created serious contradictions between his intellectual training and social status. His socialist creed demanded respect for egalitarian principles while he needed his status as sardar to challenge the establishment. As a sardar he sometimes acted in a manner the scholar in him could not have approved. The contradiction could not be resolved. He became more of a recluse.

During his last imprisonment, on a concocted murder charge, there were reports of his being maltreated by his jailers. Asma Jahangir led the entire leadership of the Human Rights Commission of Pakistan to pay him their respects in prison. He did not decline to meet them but it was an opaque-eyed sardar that they saw. He showed little inclination to speak. It seemed he and the visitors belonged to two different worlds. The sardar had clearly raised himself to a position where his enemies could do him no harm, and his friends could do him no good.

After his release, he realised his strength lay in being honest to himself, in his ability to reject the offices he was offered. The killing of Balaj, a dear son, caused a deep wound and he was deprived of the company of all his surviving sons except one. The state made no attempt to win over the wounded patriarch. The only thing he was left with was the pride that the Baloch have not yielded to any of the various tyrannies they have faced in their long journey towards realising themselves.

Now that Khair Bakhsh is gone it is for Islamabad to ponder the situation it has created for itself by failing the Baloch people along the line — from a man of compromise (Nawab Akbar Bugti) to a man of principle (Nawab Khair Bakhsh Marri.) The lesson is: the Baloch will survive, let their detractors worry about themselves.

The writer is a director of the Human Rights Commission of Pakistan (HRCP).

One thought on “The scholar sardar”